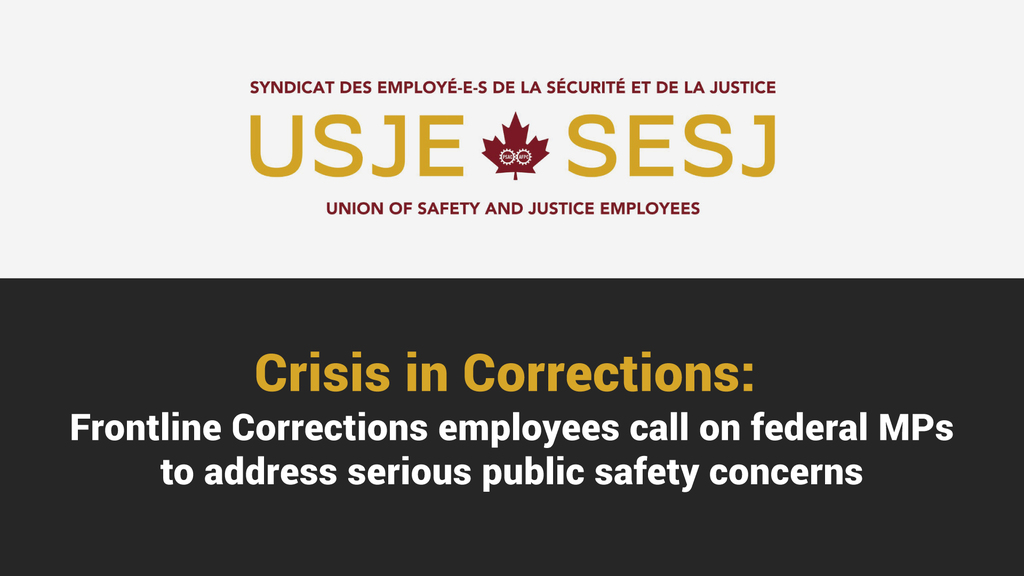 Pressure to release offenders earlier to the community, changes to key rehabilitative programs and inadequate staffing to supervise offenders are putting communities and workers at risk.

(OTTAWA -December 2, 2019) Today, days before Members of Parliament head back to the Hill, the Union of Safety and Justice Employees (USJE) is calling on the federal government to take immediate action regarding the challenges facing front line employees in their efforts to adequately supervise and rehabilitate offenders -- and to ultimately keep Canadians safe.

Recent incidents involving federal offenders who have walked away from federal Community Correctional Centres (CCC), where they are mandated to reside under the strict supervision of Correctional Service Canada (CSC), have prompted USJE to increase pressure on elected officials to take immediate action.

Referred to as “unlawfully at large,” such incidents where high-risk offenders have vanished from federally-mandated community-based residences have recently occurred at the Parrtown Community Correctional Centre in Saint John, NB, as well as in Vancouver, Montreal, and Halifax.

Just days ago, a Canada-wide warrant was issued for Kenneth Froude, a federal sex offender who was released on parole in Kingston under a Long Term Supervision Order.

A recent USJE report released found that over two thirds of parole officers reported they are not able to adequately protect the public given the complexity of cases and workload pressures.

“The concerns from the Correctional employees working directly with federal offenders that USJE represents have been consistent across Canada,” said USJE National President Stan Stapleton.

“Our members are deeply concerned about their capacity to protect the public when there are inadequate measures in place to do so. Further, their own safety is often at risk,” added Mr. Stapleton.

Through a seven-city tour across Canada during the fall, USJE completed a series of community safety roundtables featuring front line Correctional employees and federal candidates from the five major parties. During these roundtables, USJE representatives working in Corrections reported:

“In corrections, regardless of our specific role within a federal prison or in the community, we all share the duty to rehabilitate offenders,” said Carol Osborne, USJE Regional Vice-President for CSC Community and Parole Board (East) employees.

“This is not an area you want to chronically under-staff across the country and deprive offenders of crucial support.”

“As frontline employees who see up close the impact of these serious challenges every day, we are sounding the alarm bells in hopes that proper measures will be put in place before more CSC employees exit the profession, and members of the public are at serious risk of getting hurt,” Ms. Osborne highlighted.

Asks to the federal government

USJE is calling on the new government to:

“The message we are getting loud and clear from CSC employees working with federal offenders is that we’re at a crisis point,” said Stapleton.

While over 40 percent of federally sentenced offenders released are living in the community under supervision, a number that is increasing, only 6 percent of the overall budget is allocated to community corrections.

“We recognize that the previous Liberal government made an unprecedented investment in federal Corrections to improve administrative segregation (solitary confinement). We now look forward to working closely with the new Minister of Public Safety and Emergency Preparedness, The. Hon. Bill Blair, to find solutions to these complex issues.”

USJE represents over 16,000 Federal Public Service employees who work for various federal departments and agencies in a safety or justice capacity. The greatest number of USJE members work as CSC employees within federal minimum-, medium- and maximum-security penitentiaries and in parole offices across Canada. The second largest group of USJE members are RCMP employees.