​Members of Local 50081 led an Information Picket on Tuesday, November 18th, outside of the Winnipeg Parole Office

One of the primary reasons for this Information Picket was to bring attention to the announced cuts to the Community Corrections Liaison Officer (CCLOs) positions. CCLOs were part of an innovative Integrated Police and Parole Initiative across the country. Correctional Services Canada has announced that CCLO positions will be terminated nationally as of the end of 2014 as part of or the Deficit Reduction Action Plan (DRAP) . 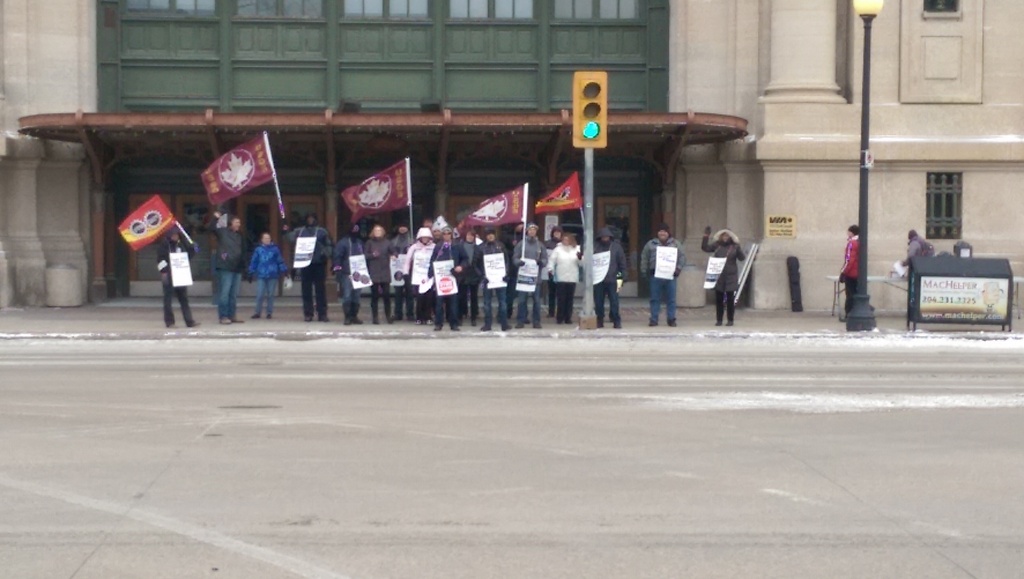 The loss of the CCLO positions ‎will present a number of real challenges for Community Parole Officers which includes a dismantling of an enhanced sharing of intelligence/information network between the CSC and local police forces. These CCLO positions were filled with reputable police officers from the RCMP and other local policing agencies from across the country. Community Parole Officers are deeply concerned with these losses and how they could impact staff and public safety.

CCLOs are not represented by USGE and reinstating this program would mean absolutely no job gains for USGE members. It would, however, enable the strong relationships that have been developed between police forces and community parole officers to continue – for the benefit of all Canadians.

"‎The Community Correctional Liaison Officer positions were created to enhance the working relationships between CSC and police forces across Canada. Over the life of this program, CCLOs have also been involved in the coordination of supervision, monitoring and apprehension of the most dangerous criminals. They have done this through their ability to work in collaboration with ‎Parole Services and specialized units within the Police Services in 17 locations across Canada.

Community Parole Officers who have worked closely with CCLOs believe that the cuts to these positions will be detrimental to public safety in regards to the monitoring and supervision of some of Canada's most dangerous offenders. By cutting these positions, Correctional Services Canada is compromising the opportunity to sustain strong working relationships that have been established between police officers and parole officers across the country. The approximate $2.5 million per year in projected savings pales in the comparison to the value of this program.

The Correctional Investigator, Howard Saper,recently noted in his October 20014 report, Overcoming Barriers to Reintegration: An investigation of federal community correctional centres, that community parole officers are already having to do far more with less as a consequence funding cuts instituted via the Deficit Reduction Action Plan (DRAP).

As of April 1, 2014, CSC will increase the ratio of Parole Officers to offenders from 1 to 8 to 1 Parole officer to 13 Offenders and decrease the minimum number of times a Parole Officer must meet with an offender each month from 8 to 4 for higher risk offenders and from 4 to 2 for those with a lower risk.

Any reinstatement of funding for CCLO positions cannot be accomplished by further cuts to the work that Community Parole officers undertake. Unfortunately, the operating budgets to prepare offenders for resettlement and safely maintain them in the community have seen no new investments and are set to decline in real terms in 2014-15 and beyond. This needs to change.