Over 200,000 workers and their families are still suffering financial and emotional fallout from the Phoenix pay system disaster. The Public Service Alliance of Canada’s (PSAC) top priority is to end this nightmare for federal public service workers. PSAC currently has an entire website dedicated to helping members with Phoenix related problems and how you can get help or take action.

Recently USJE has appointed one Labour Relations Officer whose sole role is to review and process Phoenix related grievances and to assist with other possible recourse such as “Claims for Out-of-Pocket expenses”.This officer will be supporting USJE RVPs and Local Presidents in working to help resolve as many claims as possible as quickly as possible. 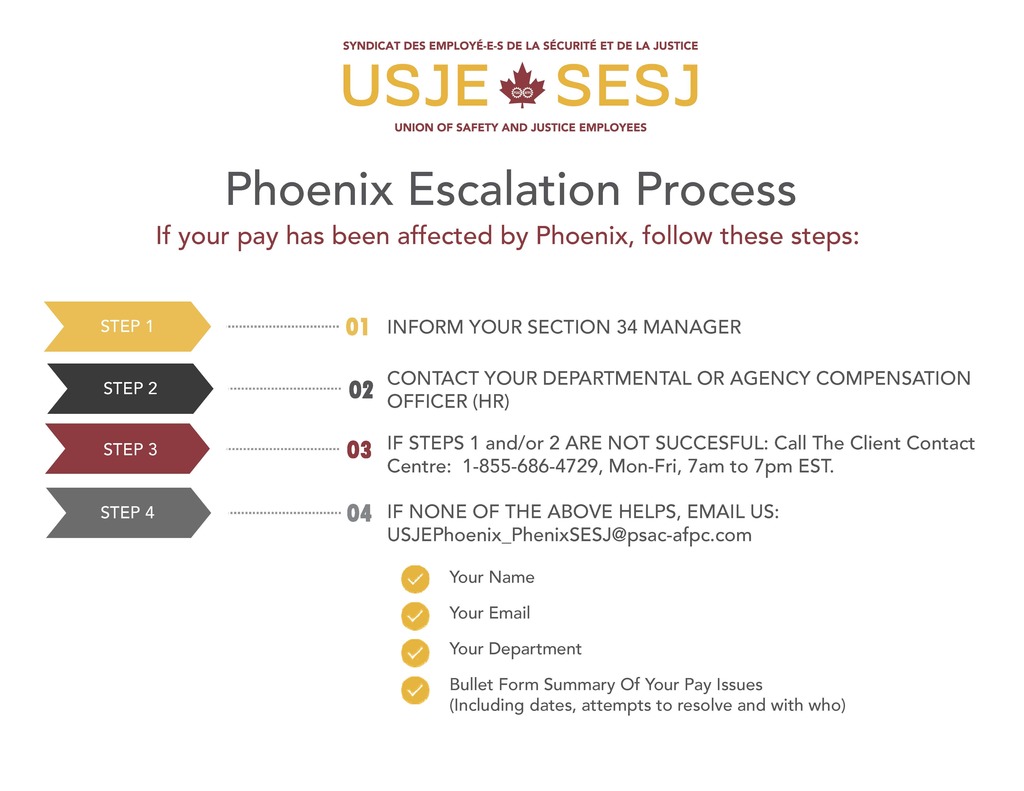 Please ensure to fill out a Phoenix Authorization Form and attach it to your e-mail. 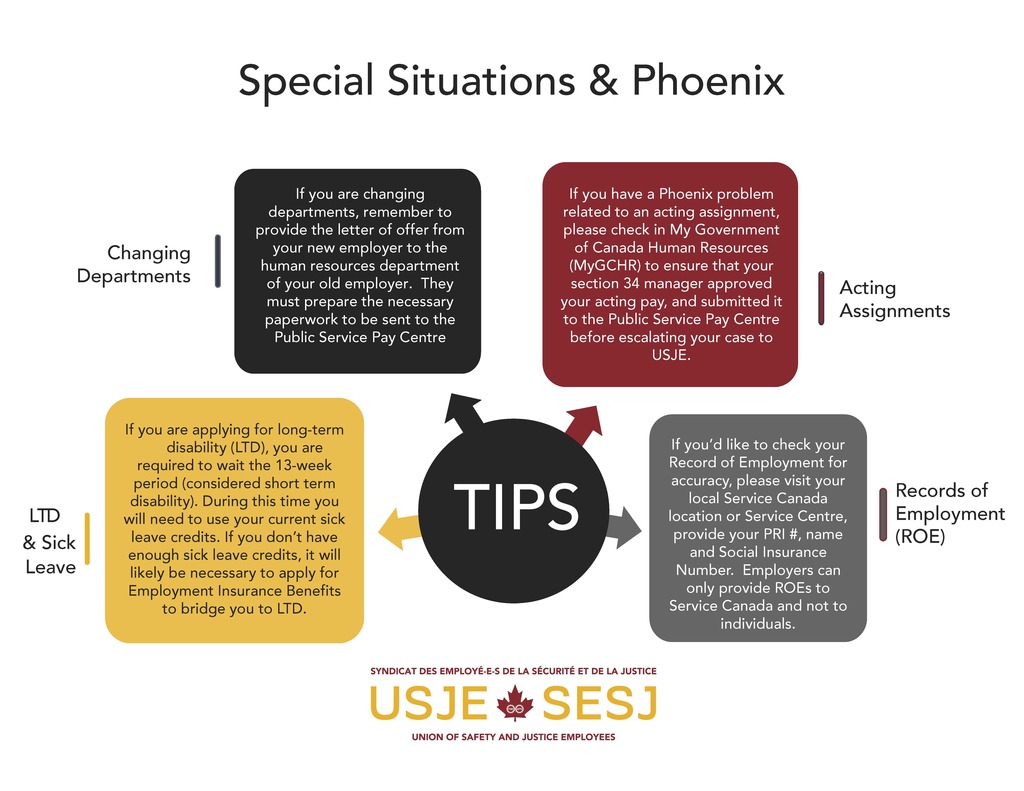 USJE is operating in the following manner with the majority of the departments we represent:

Phoenix pay related grievances should be heard at one of the lower levels (we recommend level 1) in order to collect information and documentation. Employees are expected to provide supporting documentation, such as email correspondence with their supervisor about the issue, correspondence with the Pay Centre, Track Changes information, as well as any and all Pay Actions Requests (PARs). It is understood that local management may not be able to resolve the issue at the first level, a response will be provided and then the grievance can be transmitted to the final level with the required signed transmittal form and an agreement in writing that the second level is being skipped.

To file a Phoenix-related grievance, it is extremely important that you have all the necessary documentation to argue the losses that you have suffered. The documents include, but are not limited to: pay stubs, work records, receipts, bank statements indicating overdraft or other charges or penalties, credit card statements, letters from landlords indicating areas which will demonstrate:

NOTE: Discrimination is an action or a decision that treats a person or a group negatively for reasons such as their race, national or ethnic origin, colour, religion, age, sex, sexual orientation, gender identity or expression, marital status, family status, genetic characteristics, disability and conviction for an offence for which a pardon has been granted as per the CHRA. Only grievances demonstrating discrimination based one of the prohibited grounds contained in the CHRA and/or the No Discrimination clause of your collective agreement may be referred to adjudication. An example of a potential grievance would be a member who is on a gradual return to work but is not being paid on time may have difficulty with the return to work due to a lack of funds to pay for transportation, food, maintain shelter etc.

For those claiming discrimination only

We have previously identified that we need you to demonstrate the efforts you have made trying to resolve your pay issues. It is also very important that if you have incurred financial expenses because of pay problems, you submit a claim. The Government of Canada has provided this resource, regardless if we feel it is adequate or not, it is important to use it when applicable. Each department should have a claim’s officer to help with the claims process. If a claim is refused a separate grievance related to that denial could be filed.

There are four types of claims available to be claimed:

1)Out-of-pocket expenses such as interest charges or late fees;

3)Request and advance of government benefits, such as the Canada child benefit;

The CRA assesses your income based on the T4 provided by your employer. If you have any questions regarding the preparation and filing of your T4, and you are or were being paid by a department served by the Public Service Pay Centre in Miramichi, please contact the Public Services and Procurement Canada (PSPC) Call Centre at 1-855-686-4729. If your department is not served by the Public Service Pay Centre, contact your department’s compensation services. For more information from PSPC regarding tax slips go to Accessing and managing your tax slips.You can find Frequently Asked Questions for 2016, 2017 and 2018 Tax implications of Phoenix Payroll issues by searching same, as an example “2018 tax implications of Phoenix”.

On January 15, 2019, the Government released proposed legislative changes that will generally allow employers who make an overpayment of salary in error to recover the income tax, CPP contributions, and EI premiums withheld and remitted on the overpayment from the CRA. This will allow employees to repay employers only the net amount instead of the gross amount as is currently required when the salary overpayment and repayment are made in different years.

What does this mean for you?

If you have been overpaid in a previous year, and the overpayment is not yet recorded in Phoenix your overpayment calculation may qualify under the new legislation.

If your situation qualifies under the proposed legislation and the above criteria, the income tax, EI and QPIP will be adjusted on your previous year salary overpayment once it is recorded in the Phoenix pay system.However, PSPC will not run the overpayment calculation process and amended tax slips for overpayment amounts reported for 2016, 2017 and 2018 until the legislation changes have been implemented in Phoenix.

If you are a resident of Quebec, please see Finance Quebec’s Information Bulletin 2019-1, Harmonization with news release 2019-004 of the Department of Finance Canada.